Posted on June 18, 2013 by theprofessionallitterpicker 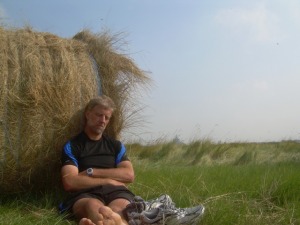 …So, did I get a decent night’s sleep? Oh yes! I found a campsite who let me string up my hammock and tarp in a small wood full of stout pine trees for only 5 euros. Was it dry? Yes! Were there showers? Oh yes! Was there a lake? Oh yes! Was there a beautiful view? No, not really, it was a pleasant campsite but not with the view I’m looking for.

So we’re nearly there, but I have the vision in my mind’s eye. Two stout trees up an embankment maybe 20 yards from the huge lake that stretches way off into the distance. Hills and trees either side, no houses in sight. Now where is it?!

(To understand the above you’ll have to read part1,2 and 3 as well as this post!).

I’m sat in a bar supping the usual coffee having asked permission to stay for an hour or so and use the internet. No problem they say! One of the good things about French bars is that they are used to walkers and they willingly fill up your water bottles with fresh cool water-for free. Mine’s now full again.

So I just heard that I have not been short listed for: http://www.ajourneyonfoot.com/ Penguin books with the aid of Robert McFarlane are ‘hiring’ a summer Wayfarer to tramp some of the UK’s fabulous walks for two months this summer. Payment, expenses, gear, an audience…could have been good, but obviously not for me though!…so do I still ‘consider’ walking on to Morocco from here, (don’t gasp too loudly Mother!)? I won a surfing holiday through: http://www.pleasefund.us/ whilst attempting to raise £10,000 for a crowd funded 3 month Litter Campaign I hoped to undertake in the Dorset area of the UK. (I failed!) The holiday includes surfing tuition and full board and lodging…but no flights. Considering I really don’t want to fly unless I really have to, walking seemed like a good option. I could then use the time in Morocco to write the long awaited, (by me!) best seller I’ve been meaning or wanting to write for years. We’ll have to think about that option.

And what of the conversation I had with the young lad on the sail boat the other day? He reckoned that during the Normandy landings there were about 2 million soldiers, (of many nations) amassed in the area. A staggering figure. But everywhere you go in Normandy you are reminded of the huge loss of life. Monuments, cemeteries, statues, museums, books, films….So I picked up a pamphlet in the tourist office. It looks like the website to educate yourself about that awful time is:

And according to my brochure it speaks of more than 700,000 German troops and the same amount of US troops. So that’s a million and a half already…and there were more from other nations. 2 million could be right. I will spend more time looking at the website. A tour of this large area would surely be an enlightening time for anyone, as many people do.

So my time is nearly up at the bar. My feet are slowly cooling down. It’s 4 pm and I’m not sure how much more walking they will endure today! I’ll like to get a little further. I’m nearly half way to Avranches now.

I wouldn’t mind giving up! I wouldn’t mind a day of rest, (although I’ve only been going for just over two days so far!). I could do with some decent walking shoes, oh and I bought three pairs of socks this morning which instantly cured my blister pain! There’s only another 15 kilometres of this beautiful but slightly tedious ‘old railway track’ to go though, and then the scenery ought to get much better. I can join the ‘Chemin Anglais’, English Way, which is the old route pilgrims used to take from the UK and Ireland to seek sanctuary at the famous Mont St Michel just round the corner from here, well, several days walking that is.

So, will I quit, stick out my thumb and hitch the rest of the way to my mate? I think there’s little chance, but my feet will dictate…they feel almost normal temperature now. I’ll pay for my coffee, buy a piece of fruit or two, another avacado maybe, loaf of bread…and carry on. Who know’s what may happen along the way? Good things I’m asking for…..

(Above photo is from a couple of years ago, close to Mont st Michel, when I attempted to run and walk from St.Malo to Crete, Greece.  I got 90 miles and rather hurt my leg.  Had to stop.  I’m taking much more care this time).

Cleanin' up the World!
View all posts by theprofessionallitterpicker →
This entry was posted in 3.Twitter Might Help., Litter and Travel. Bookmark the permalink.