Posted on June 22, 2014 by theprofessionallitterpicker

Our Planet is covered in litter, perhaps the percentage of trash to land/sea surface area is minimal but the visual, emotional and health effect is large. Volunteer litter pickers do a great job, as do NGO’s and Charities dedicated to the eradication of this ‘plight’, as us ‘litter carers’ call it. So why not create a project based on employing people to pick up this litter? In no way would this be a service just to clear up ‘after’ people. It would run alongside staunch exclamations to ‘Please Stop Dropping Your litter And Dispose Of It Sensibly’.

There are thousand of desperate Migrants lining Europe’s borders. From The Western Sahara south of Morocco, to Tunisia, Libya, Egypt, around to Turkey, Greece and mainland France. The majority of these people, from Africa, Asia and the Middle East are fleeing war, persecution, famine, corruption and potential imprisonment or worse. Okay, there are rogue elements, but the majority are desperate, hungry, penniless…and being treated as criminals and very second rate Human Beings.

Over 40,000 people, including children have made the perilous journey by rickety boat from the North African coast to Italy in the first five months of this year already. Hundreds exist in the forests above Melilla and Ceuta, the two Spanish enclaves in Northern Morocco, all waiting to attempt their horrific climb over the barbed wire fences to gain their hoped for ‘new lives’ on successful arrival on European soil. Thousands wait their turn on North Africa’s coastline, thousands are still trekking their perilous journey across Asia, the Near East, the Balkans and onto the ‘first’ World countries of Spain, France, the Netherlands, Germany and the UK.

There have to be controls, yes, but there has to be Humanity too. We can, if we want to, ‘cater’ for these people in a far far better way. They are running from horror. At the present moment, they are also running ‘into horror’. Come on Europe!

So, we have a dirty Planet. We have thousands of dehumanized people. Many of us want to live on a clean Planet. There are many who wish for shelter, food, an income…and a job. I announce a plan to employ these people.

The title of this blog post is ‘Adam’s Story’. I was going to call it ‘God didn’t tell me to go to Calais’. But I made a plan, and the plan worked. Adam said call it ‘Adam’s Story’, so this is Adam’s story, not mine.

A keen litter picker thought he might be able to employ one or more of the desperate Migrants living in squalor, fear and at the mercy of the Authorities in one of the camps that ‘house’ these Clandestine escapees from places such as Afghanistan, Syria, Sierra Leone, Chad, Eritrea. The list is long.

You get off the ferry, follow the pedestrian signs to ‘the town centre’, walk for 20 minutes, and en route you pass a temporary Migrant camp. Squalor, yes. Litter everywhere, yes. Three rancid portaloos for perhaps three hundred people, yes. An outside wash block with a few taps and a drain away through the middle of the camp, yes. 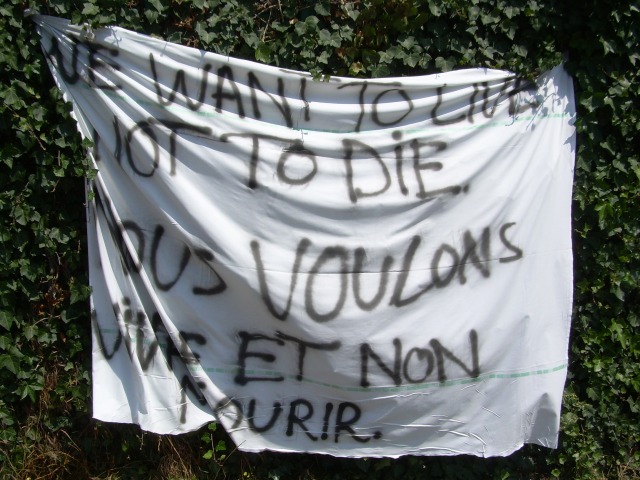 There is a hunger strike going on in the centre of the camp. Four people have already been taken to hospital. The Migrant’s demands are too unrealistic though. That’s my opinion. I wonder if the ‘No Borders’ voluntary group are influencing these people too much. These are their demands.

“Houses in Calais for all the migrants who wish to go to England and for asylum seekers who are forced to live in the street
– Houses with decent hygienic conditions: toilets, showers, garbage collection
– Houses where we can come and go whenever we like, in order to be able to continue trying to cross to England
– Houses protected from police controls, harassment and evictions
– Access to three meals a day
– Negotiations between France and the United Kingdom to allow people access to British territory”.

Yes, they need to be treated in a much much better way. Yes, decent ‘temporary’ accommodation would be fantastic. Temporary, whilst a better and workeable future is strived for for all of these people. Food, medical attention, psychological and documentational support is vital. But to demand these things alongside demanding help to cross illegally and incredibly dangerously to England, (strapped to the underneath of UK bound lorries on the ferries, and perilous boat journeys on boats made out of plastic water bottles and two man plastic rowboats bought from the local ‘Aldi’ store) is madness. The Authorities just won’t go for it. They cannot offer Humanitarian assistance whilst being also asked to endorse these clandestine, illegal and potentially deadly journeys.

So back to Adam’s story. The litter picker walked into the camp, said his hallos, asked people’s names, asked where they came from…and then met Adam. ‘Are you looking for me?’ he said. He was waiting for some journalists from the BBC to come and interview him. I said I wasn’t a journalist but I was happy to talk to him.  (ps. I would love to be a journalist).

A few weeks ago, Adam, a forty five year old from South Sudan had been shot whilst out walking at night. He had received a bullet wound to his back and a smaller one to his arm. The ‘security guard’ had been apprehended, and whilst Adam received surgery, the assailant, a twenty five year old Calais resident was charged with various offences and Adam now waits two weeks, (with a whole host of medicines to take) to see whether he will get any financial compensation for this ‘event’. Adam has only been in Calais for a short while.

He left his native country years ago. He has lived and worked for several years in both Turkey and Greece and speaks Greek, Arabic, English, some Italian, Dutch, German and is now picking up French…as easily as he picked up the litter on a beach in Calais.

He jumped at the chance of some work. And he was a model employee. The beach in fact was very clean to start with. The tractors were out every day doing there customary sweeps so that Tourists were greeted with swathes of glorious sand. It looks great. But Adam picked well. He mingled with the tourists, brought smiles to their faces…and was even recognised as the bloke in the paper who’d been shot.

We worked for an hour. I paid him twenty euros. Ok, a little over the top, but when this stopped him talking, (for the first time in about two hours!), and I realized he was crying, I also realized how desperate life has been for this man. Although God didn’t tell me to go to Calais I knew that God would go with me. Adam and I walked back to the camp. We said our goodbyes, and I jumped on the next ferry back to Dover, four hours before I was due to take the 8.25pm one. There was no need to stay any longer. The litter picker’s plan had worked.

So, as an after thought, I wonder if God will encourage me to return to Calais? Money aside for the moment…but I could employ a lot of people to clean up the beaches surrounding the Calais area. We could house these people, feed them, listen to them, employ them, and somehow ‘together’ work out how on Earth we are to live in a World that is changing daily.

I reckon we stand a good chance of success if we listen to God. At least-that’s my opinion. 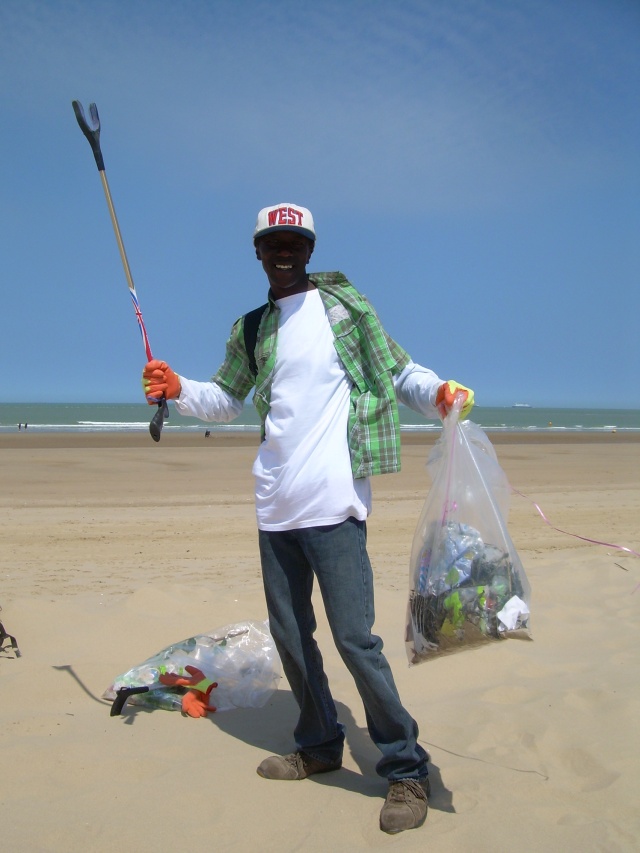 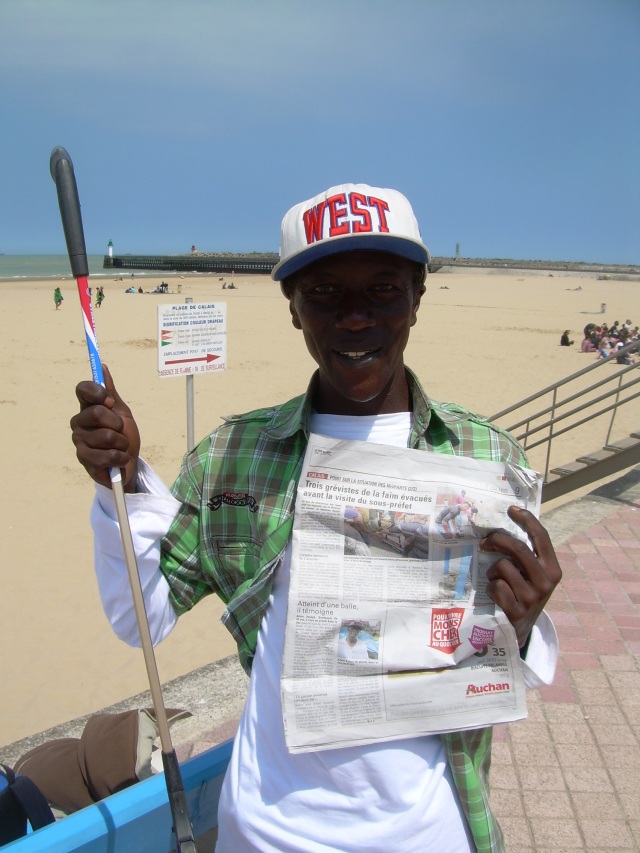 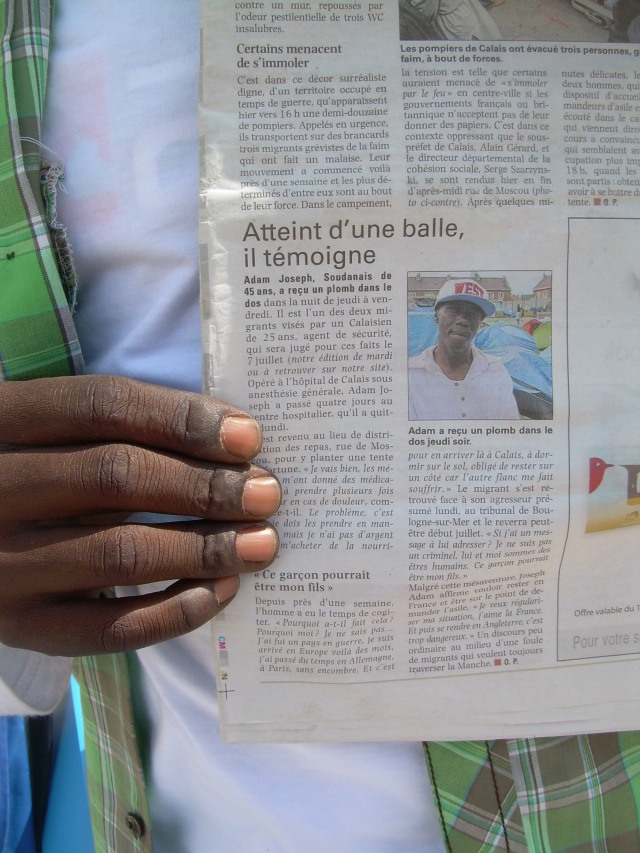 Cleanin' up the World!
View all posts by theprofessionallitterpicker →
This entry was posted in 10.Calais, France., Litter, Human Rights and Travel. Bookmark the permalink.