“Next time Rodders, next time.”

Posted on December 1, 2015 by theprofessionallitterpicker

I thought this photograph deserved a blog post of its own! 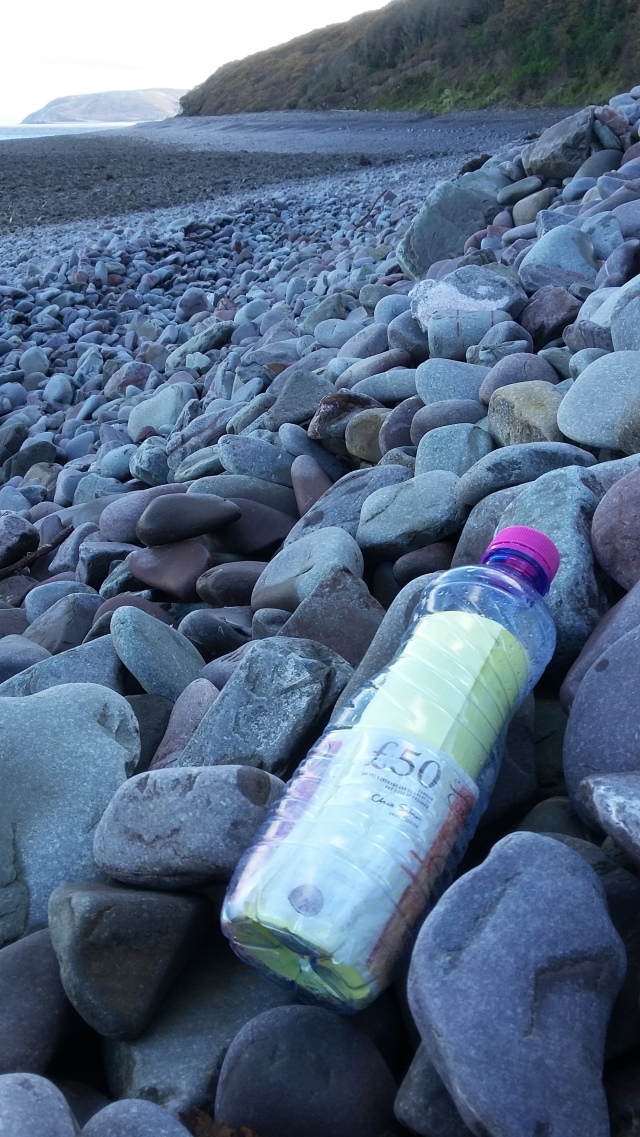 I went to a beach that gets very little traffic.  There’s a hut there that ‘Driftwood Dave’ has lived in on and off since 1982!  He recently got permission to live there, on and off, not permanently.

Loads of driftwood on the beach, loads of plastic.  I often think it possible that I’ll come across a briefcase full of money on one of my sojourns.  It hasn’t happened yet though.  I found a cash till in Ibiza once, coins scattered everywhere.  It felt a little bit like fairy land as I scooped up a couple of hand fulls of pesatos  from amongst the rock pools.  I took them to the cafe at the top of the cliff and they thanked me with a coke and a doughnut.   Apparently some hoodlums had stolen the till the night before…and as I found out, had hurled it over the cliff edge.

Having found Dave’s hut and having brought lunch with me I sat down on the pebbles to eat and stare out to sea.  Right next to me was this bottle.  I was so excited.  I knew there was a chance that the note wasn’t real, but when I shook the bottle and saw another note, I really did think my luck was in.  A message in a bottle plus two fifty pound notes.  Wow!

I searched around for something sharp because I couldn’t get either out of the bottle.  A sharp shell did the job, and hey presto the fifty pound notes turned out to be very good replicas printed on a damn table napkin!  Oh well.  I really was momentarily very disappointed!

I took the note out, read it, got out my mobile phone and texted a message to the sender: “That’s not fair!  Next time you send £50 notes in a message in a bottle, please make sure they’re real!”  I then went on to say where I had found it, pleasantly!

Less than an hour later I got a reply!  They has sent in from Cardiff a couple of months earlier.  They said sorry the notes were’t real!  The bottle had made its way across the Channel to the Somerset coast.

(Quote from “Only Fool and Horses”).

Cleanin' up the World!
View all posts by theprofessionallitterpicker →
This entry was posted in Litter and Travel, out of book.. Bookmark the permalink.